Secretary of the Treasury

Alexander Hamilton is the titular main character of the musical Hamilton.

Alexander Hamilton was born in the West Indies region of the Caribbean. According to the musical, Hamilton's father left him and his mother, who died when he was 12.

When he became older, a hurricane destroyed his town. In others' time of need, and due to his exceedingly brilliant intelligence, the citizens of the town collected funds so that Hamilton could book passage on a New York-bound ship ("Alexander Hamilton"). When Hamilton arrived in New York he became interested in the up-and-coming American revolution. There he first meets Aaron Burr in New York City ("Aaron Burr, Sir") and is then introduced to the rest of Burr's revolutionary friends and impresses them with his oratory skills ("My Shot"). He has long dreamed of laying down his life for a cause such as the revolution ("The Story of Tonight") and studied furiously before joining the Revolution, and becoming George Washington's secretary during the war. ("Right Hand Man").

Hamilton then attends a winter ball ("A Winter's Ball"), where he meets Elizabeth Schuyler. They talk to each other through letters for two weeks and eventually marry ("Helpless"). Her sister also had feelings for him, but Angelica allows Eliza to marry Hamilton, knowing that she would never be satisfied if she were his wife. ("Satisfied").

General George Washington sends Hamilton home during the war for disobeying direct orders and engaging in a duel with General Charles Lee ("Meet Me Inside"). However, soon after he was summoned back, ("Guns And Ships") to finish the war at the Battle of Yorktown. ("Yorktown (The World Turned Upside Down)").

After the war, Eliza gives birth to a baby boy, Philip Hamilton, whose innocent brilliance leaves him astounded ("Dear Theodosia").

Hamilton returns to New York to finish his studies and pursue a law career. Hamilton is then chosen as a delegate to the Constitutional Convention in the summer of 1787. Hamilton enlists James Madison and John Jay to write The Federalist Papers after Aaron Burr refuses. The newly elected President Washington enlists Hamilton for the job of Secretary of Treasury, despite Eliza's pleas. ("Non-Stop").

After Thomas Jefferson returns from France in 1789, Jefferson and Hamilton debate over the merits of Hamilton's financial plan during a Cabinet meeting. Washington pulls Hamilton aside and tells him to figure out a compromise to win over Congress. ("Cabinet Battle #1").

Hamilton's son turns nine, and he corresponds with Angelica in England, where she advises him to sway Jefferson so that Congress accepts his plan. Angelica travels back to New York to go upstate with his family but he refuses insisting he has to work. ("Take A Break").

While alone, Maria Reynolds visits Hamilton, who seduces him by claiming that her husband mistreats her. They continue to have an affair for a month until Maria's husband James Reynolds blackmails Hamilton into paying him money. In return, Reynolds will not tell Eliza about the affair. Hamilton agrees to pay Reynolds and continues the affair. ("Say No To This").

Hamilton discusses his plan with Jefferson and Madison over a private dinner, which results in the Compromise of 1790, giving support to Hamilton's financial plan in exchange for moving the United States capital from New York to Washington, D.C., a site much closer to Jefferson's home in Virginia ("The Room Where It Happens").

In another cabinet meeting, Jefferson and Hamilton argue over whether the United States should assist France in their revolution. Washington ultimately agrees with Hamilton's argument of neutrality ("Cabinet Battle #2").

As Washington steps down from his presidential position, Hamilton drafts his farewell address. ("One Last Time").

Now having no political office since the election of John Adams, Hamilton is outraged by Adams's "unprepared" nature according to Hamilton. They get in a fight with Adams bashing Hamilton for being an orphan; Hamilton's response being very harsh to Adams's weight. Hamilton's reputation takes a blow from this, and his political enemies, Burr, Jefferson, and Madison, think that it is the perfect time to destroy him ("The Adams Administration").

Thinking they have discovered a scandal capable of destroying Hamilton, Jefferson, Madison and Burr accuse him of embezzling government money and committing treason. In reality, however, they found the transactions from his affair with Maria Reynolds. Hamilton, knowing that the truth is the only way out, tells them about his affair and begs them not to tell anyone ("We Know"). Still worried that they would, Hamilton thinks about how writing openly and honestly has saved him in the past ("Hurricane"), and publicly writes "The Reynolds Pamphlet" to come clean about the affair, hoping to save his political legacy ("The Reynolds Pamphlet").

After his eldest child, Philip Hamilton, challenges George Eacker to a duel, he is mortally wounded and dies from infection ("Blow Us All Away"). Hamilton and Eliza become increasingly depressed after their loss and they move uptown ("It's Quiet Uptown").

As the Election of 1800 approaches, Alexander Hamilton is frequently asked about who he will promote for president. Shockingly, Hamilton selects Jefferson, claiming that Burr has no beliefs and stands for himself. ("The Election of 1800").

Burr, angry at his absent endorsement, challenges Hamilton to a duel in Weehawken, New Jersey ("Your Obedient Servant"). As a gunshot sounds, Hamilton soliloquizes on death, his relationships, and his legacy. He aims his pistol at the sky and is struck by Burr's shot, dying soon after. Burr laments that even though he survived, he's cursed to be the villain in history, remembered only as the man who killed Alexander Hamilton ("The World Was Wide Enough").

He now lies in Trinity Church, right near Angelica after she passed away. ("Who Lives Who Dies Who Tells Your Story") 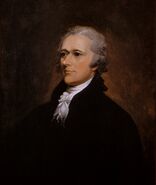 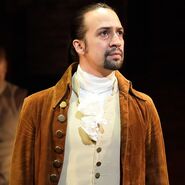 Hamilton, portrayed by Lin-Manuel Miranda, at the end of opening song 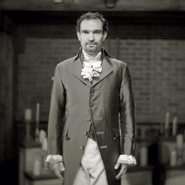 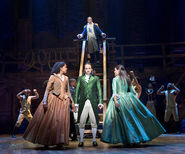 Hamilton in a green uniform in Non-Stop 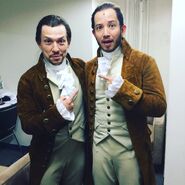 Joseph Morales with Miguel Cervantes in costume at beginning of the show. 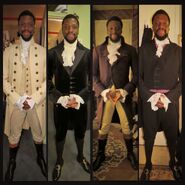 Michael Luwoye as Hamilton in Beige and Black, and as Burr in 2 outfits.

Alexander Hamilton (Lin-Manuel Miranda) in "The World Was Wide Enough"

The insignia of a Major-General, a rank Hamilton once had.
Add a photo to this gallery