Hamilton is a professionally filmed recording of Hamilton released on Disney+, shot in June 2016 over 3 days at the Richard Rodgers Theater and featuring a majority of the original Broadway cast, minus Betsy Struxness and Emmy Raver-Lampman. It was released on Disney+ on July 3, 2020, though it was originally scheduled for a theatrical release on October 15, 2021. The release date was set forward by 15 months due to the COVID-19 pandemic.[1]

The film was nominated for a Golden Globe in the category Best Motion Picture – Musical or Comedy.[2] 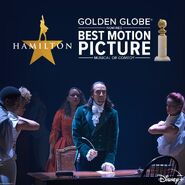 "The Room Where It Happens" Clip Hamilton Disney
Released June 27, 2020