Emile Ruddock
Hercules Mulligan is a friend of Alexander Hamilton and serves as a spy working in favor of the American Revolution. He is portrayed by Okieriete Onaodowan in the original cast.

Hercules Mulligan is first seen in ("Aaron Burr, Sir") where he, along with Marquis de Lafayette and John Laurens, questions Aaron Burr's intentions and ask why he is stalling in the revolution. When he introduces himself, he warns people to

lock up their daughters and horses since "it's hard to have intercourse over four sets of corsets". He later reveals that he is a tailor's apprentice and wants to join the revolution to socially advance. Singing along with Alexander Hamilton and the rest of his friends, the talk about bringing the rising nation into prosperity and refusing to throw away their chance to shape the country ("My Shot"). Bonding over their newfound brotherhood, Mulligan sings and drinks with his friends wishing for their future glory and freedom ("The Story of Tonight").

Following the ("The Schuyler Sisters"), Mulligan says that he wants to tear Samuel Seabury apart after listening to his decree ("Farmer Refuted"). Mulligan joins the revolution, as he hinted at in "My Shot", and joins his revolutionary comrades as they prepare for the war ("Right Hand Man"). After Hamilton marries Eliza, he joins his friends back in a bar as they toast to the tom cat's happiness and latest achievement.

Mulligan returns to New York and his apprenticeship while his revolutionary allies return to fight in the war ("Stay Alive"). Yet, after a considerable period of time, Mulligan returns and reveals that he was a tailor spy smuggling information from the British government during his departure. After the fighting ends and they tend to their wounded, Mulligan exclaims that their side won along with the other American soldiers ("Yorktown (The World Turned Upside Down)"). Finally, alongside George Washington, John Laurens and Marquis de Lafayette, he reminds Hamilton that history has its eyes on him while Alexander decides to return to his work.

Following the war, Mulligan makes no appearance in the production.

(from left to right) Marquis de Lafayette, Mulligan, John Laurens, and Alexander Hamilton in "The Story of Tonight". 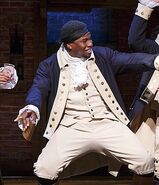 Hercules Mulligan (Okieriete Onaodowan) in "The Story of Tonight"
Русский
Community content is available under CC-BY-SA unless otherwise noted.
Advertisement