Khalid Daley
Philip Hamilton is a character in Hamilton. He was the son of Elizabeth Schuyler Hamilton and Alexander Hamilton.

Philip Hamilton was born to Elizabeth "Eliza" Schuyler Hamilton and Alexander Hamilton on January 22, 1782. Hamilton sings of his love for his new born son and the life he hopes to provide for Philip ("Dear Theodosia"). Phillip doesn't appear in Act One, though does mention that he is Eliza and Alexander's Son ("That Would Be Enough").

Alexander decides to work at home for some time so he can see his son for the first time since he has grown up. At dinner on his ninth birthday, Philip presents to Alexander a short poem he composed himself, briefly reciting numbers in French that he learned from his mother that impresses his father immensely. After Hamilton says that he cannot accompany the family on their trip upstate, Philip travels with Eliza and his aunt Angelica Schuyler ("Take A Break").

Philip is briefly seen when his grandfather Philip Schuyler was overtaken of his seat in the Senate by Aaron Burr, and exclaims his surprise, wondering if his father knew yet, which Alexander did ("Schuyler Defeated").

Philip is also briefly seen in "One Last Time", where he stands by Alexander and Eliza as George Washington finishes off the song.

Philip is, once again, briefly seen in "The Reynolds Pamphlet". He is seen being taunted by Jefferson, Madison, and Burr while reading the pamphlet, walking away gloomily after.

Years pass, and Philip graduates King's College in 1801 at the age of 19. Soon thereafter, he comes across a man by the name of George Eacker who has been putting down Philip's father in public. Philip, not having it, confronts Eacker, challenging him to a duel. Before the duel, he seeks advice from his father, who tells him to fire his gun into the air, throwing away his shot. The duel results in a misfire and Philip is fatally shot by his opponent ("Blow Us All Away").

As he is on his deathbed, he is surrounded by his mother and father, where he is seen saying his last goodbyes before his death ("Stay Alive (Reprise)"). 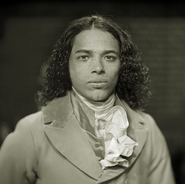